Is there really a best time of year to go to Disneyland? It really depends on what you want to get out of your visit. Some prefer to go when the crowds are light, but then the special attractions are few. Others will only go when the theme park is all decked out, such as during the Halloween or Christmas seasons, but that is also when the park is most crowded.

Disneyland theme park is open every day of the year, including all major holidays. Hours vary throughout the year, with shorter hours during the winter season. The park's fireworks are held nightly (weather permitting) during the summer and holidays, and only on weekends the rest of the year. Disneyland may also close early on occasion if a very large group is sponsoring an event or if it has reached capacity, between 60,000 and 80,000 visitors depending on staffing levels and number of operating attractions. This occasionally happens on New Year's Eve or New Year's Day.

If you plan on visiting the park more than once or twice a year, save time and money by purchasing one of the four Disneyland annual passes available. The passport's blackout dates vary depending on the level you buy.

The Best Time of Year to Go to Disneyland

For the ultimate Disney fanatic, the holidays are usually the best time of year to go to Disneyland. Starting around a few weeks before Halloween and running through mid-January, various locations throughout the "Happiest Place on Earth" are decorated with a chosen holiday theme:

However, with these amazing sites come just as amazing long lines on most of the popular rides:

Savvy guests break up their visit into at least two trips. For one of them, get there when the gates open up (usually around 8 a.m.), as the lines tend not to be as long first thing in the morning. Make another trip to the park just to visit the scenery and attractions.

If you prefer to visit the park without a lot fanfare or long lines, then there are a few times during the year when the park isn't at or near capacity:

The Worst Time of Year to Go to Disneyland 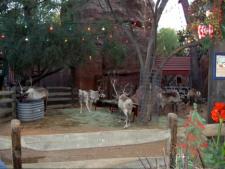 While there are quite a few good times to go to Disneyland, there are also dates where you really don't want to go, mainly because the crowds will be so heavy, such as:

Several times throughout the year, Disneyland will sponsor some special events, which will bring in additional patrons and crowds:

While Disneyland officials won't come out and say they sponsor unofficial events, they do occur, and bring with them thousands of unexpected park visitors. They include:

While summer is usually a pretty busy time at Disneyland, weekends are far more crowded than weekdays. This is because many larger businesses sponsor their company picnics at the park. These days are known to bring in an additional few thousand visitors.

If you still aren't sure when to visit Disneyland, take a look at the park's website to get an idea of operating times, weather, closed attractions, and special events. The bottom line is Disneyland is a busy place year-round. If you choose your dates wisely and don't mind standing in line for at least some of the attractions, then you can't go wrong with the best time of year to go to Disneyland - any day your schedule permits.