Busch Gardens' roller coasters are undoubtedly the star attractions at their two popular amusement parks. With clever themes and a great ride experience, guests will not be disappointed at the thrills they can find in either Virginia or Florida. While some amusement parks seek to attract guests simply by building new rides, Busch Gardens takes the extra step to thoroughly integrate each coaster into each park's landscaping, décor, and theme. Those extra touches make these amazing thrill rides even more exciting.

Formerly known as Busch Gardens Africa, this theme park is located at 10165 N McKinley Drive, Tampa, FL 33612. Its amazing roller coasters are located in six of the park's nine African zones. Each one has G-force, loop and air-time statistics to send even the most knowledgeable roller coaster fan's head into a spin. 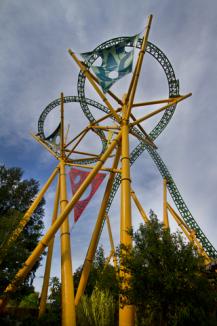 At first glance, Cheetah Hunt sounds relatively tame. It has only one inversion, reaches speeds of only 60 mph, and has a relatively low height restriction of 48 inches. So why it is rated 9 on the Theme Park Insider? According to one reviewer, "Its three launches makes it seem like a one trick pony, but it has a lot of airtime to it, and its an extremely entertaining coaster experience." With drops up to 130 feet, you will, on numerous occasions, feel like your stomach does not quite have the ability to keep up

This dual coaster, located in the Morocco zone, is for riders 49 inches and above. It has both Lion and Tiger sides, and it's the incarnation of an African legend about a mythical creature that was made up of both great cats. Six near misses are strategically positioned throughout the twisting wooden track as the two coasters duel for dominance. Unfortunately, at 50 mph, they don't do it at the speeds you would typically expect from the high quality roller coasters at this park. Rated a 7 on Theme Park Insider, riders tend put its lack of thrills down to its wooden track. One reviewer wrote, "Rattled me around so much that I ended up with a headache."

In his review of Kumba, the Coaster Critic encourages you to "Strap in and ride the best looper on the planet." Located in the park's Congo section, this seven inversion, steel looping coaster whips around loops, including a 114-feet loop, a dive loop, and a zero-G roll at speeds up to 60 mph. Unlike many roller coasters, its drops, such as its 135-foot drop, are right at the end.

Named after an Egyptian god, this tomb-themed, inverted coaster takes riders on a vicious flight through seven inversions, including the unique batwing dual inversion element, a 104-feet vertical loop, an Immelman, and a zero-G roll. At speeds up to 60 mph, guests 54 inches and taller will fly around the ride's graceful curves. "Best inverted roller coaster I have been on" stated one of the reviewers on the Theme Park Insider, who have rated it 9. 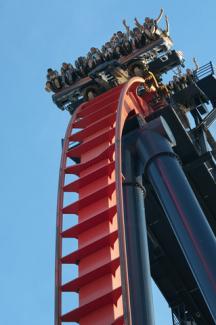 Located in the park's Timbuktoo area, this small but powerful ride opened in 1980. Judging from the reviews, which only netted Scorpion a rating of 6, it's showing its age. One reviewer summarized what most people seemed to think by saying it was only for kids experiencing their first loop.To be fair, its one loop is powerful enough to generate forces more than three times the force of gravity, but it is only one loop. At only 60-feet high and traveling at 50 mph, most believe the coaster needs more to warrant a place at this park.

Situated in Stanleyville, this floorless roller coaster plummets at a speed of 75 mph down a 195-feet drop set at a 90 degree angle. "I almost chickened out, but I am glad I didn't. Its amazing," said one reviewer. Enough reviewers agreed with him to give SheiKra a rating of 9.

Once known as Busch Gardens Europe, Busch Gardens Williamsburg is located at 1 Busch Gardens Boulevard, Williamsburg, VA 23185. The park is divided into European-style hamlets that reflect the culture of 10 different European countries, including Italy, Scotland, France and Switzerland. Each of the roller coasters on this list represents one of these countries. For example the cars for Verbolten, located in Oktoberfest hamlet, are designed to look like a German racing car on the autobahn. If that sounds like a gimmick, you should know that Amusement Today voted Alpengeist, Apollo's Chariot and Griffon among the top 50 roller coasters in the world. 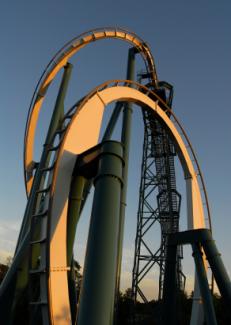 Perhaps the best coaster in the world, Alpengeist rated a 10 on Coaster Critic and 9 on Theme Park Insider. This massive, inverted coaster first takes guests 54" and taller nearly 200-feet above the ground before soaring up to 67 mph through six inversions while exploring the mythology of a rampaging beast that terrorizes a remote hamlet. This ride offers non-stop thrills right up to the end.

Europe is home to a lot of ancient mythology, and this steel coaster brings the flight of Apollo's golden chariot to life. Riders will experience fast-paced hills and dips, as well as nine drops at stomach-dropping angles of 65 degrees and speeds as face distorting as 73 mph. According to the Coaster Critic, who rated this coaster 10/10, "Its fast, smooth and thrilling... What more could you ask for?"

This ride has been praised for it looks. After waiting in a German tourist information office, a German-style racer zooms along a steel track autobahn into the dark Black Forest. The ride finishes with an 88-feet drop into the River Rhine, but what is it like as a ride? "I can honestly say this is the first ride I was disappointed in," says one reviewer on Theme Park Insider. It's easy to see why. Replacing the highly popular Big Bad Wolf, Verbolten travels at only 53 mph. Both Theme Park Insider and Coaster Critic give Verbolten a rating of 8. 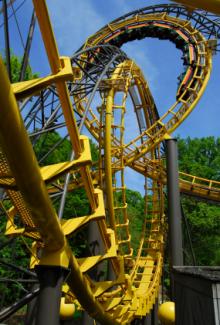 The fact that this coaster is one of the oldest at this park does not seem to affect its reputation. According to the Coaster Critic, who gives this coaster a rating of 8, "For a steel coaster from the '70s, the Loch Ness is amazing." The two picturesque interlocking loops are a classic and immediately recognizable ride element that challenges riders 48 inches and taller at speeds of up to 60 mph.

One of the park's newest rides, this soaring coaster is over 200 feet tall and plunges riders straight down at a 90-degree angle. As a floorless coaster, Griffon treats riders 54 inches and taller to an unrestricted, open air experience as it flies through two inversions at top speeds of 71 mph. The Theme Park Insider rated this coaster at 9, while the Coaster Critic rates it only at 8.5. "Thought this would scare me more than it did." said one reviewer, before admitting that sitting in the front makes it a far better ride.

Striving to Be the Best

While neither of these Busch Garden parks have received any awards for best roller coaster in the world so far, reviewer ratings show that these rides still have quite a lot of thrills to offer. Chances are good that it will be worth your time to put those ratings to the test and ride these coasters yourself. One of them just might become your new favorite.