Canada's Wonderland was first proposed in 1972 by the Taft Broadcasting Company. Among the possible sites was the greater Toronto area, Cambridge, Milton or Niagara Falls. Maple was selected due to its proximity to Toronto and the major highways. While the park construction was opposed by area cultural institutions, it finally opened to the public on May 23, 1981.

Wonderland was owned by Paramount Pictures from 1994 to 2006, when it was known as Paramount Canada's Wonderland. In 2006, the park was sold to Cedar Fair Entertainment Company and returned to its original name. During 2005 and 2006, Wonderland was the most attended seasonal theme park in North America.

Eight themed areas that surround Wonder Mountain at the center of the park.

Wonderland includes more than 200 attractions, including 15 roller coasters. Guests will find these rides and a whole lot more: 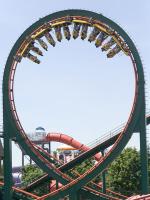 Sky Rider is one of the thrilling coasters.

Canada's Wonderland added the Kingswood Music Theatre in 1983, a 15,000 seat amphitheatre that hosts a variety of headliners. Additionally, theatres throughout the park offer shows such as the "Endless Summer" ice show, "Twisting to the 60s" musical revue, and "Dora's Sing-a-Long Adventure." "Sauter," a high-diving and trampoline show, and "Victoria Falls High Divers" add exciting entertainment options to the mix.

There are loads of dining options at Canada's Wonderland. Guests can try Coasters Drive In, a 50's style diner, or The Marketplace with its all-you-can-eat buffet. Other dining options are scattered throughout the park - from ice cream to hamburgers, and everything in between, guests at Wonderland will never go hungry!

Wonderland is open May through October; admission includes both Wonderland and the Splash Works water park.

For more information about Wonderland theme park, including event information and a park map, interested individuals can visit the official website, call (905) 832-8131, or write to the park at: