Conveniently located at the border of North and South Carolina, Carowinds has become a popular family theme park destination for vacationers. Part amusement park, part waterpark (both included on the same admission ticket), Carowinds is the self-proclaimed "Thrill Capital of the Southeast" and offers fun for riders of all ages.

This 105-acre theme park is located 10 miles south of Charlotte, North Carolina at the South Carolina border. With more than 100 rides, a water park, live entertainment and a Peanuts comic strip themed area for younger children, the park never fails to disappoint. Open since 1973, the park became part of Cedar Fair Entertainment Company in 2006. 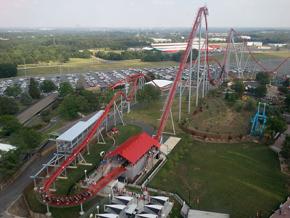 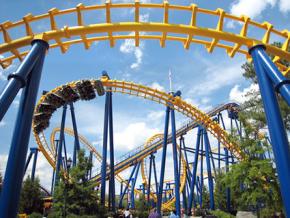 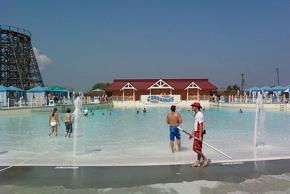 According to Carowinds' stated $50 million revitalization project, the park has new rides on the horizon:

There is always plenty of live park entertainment, including Meet The Peanuts Gang, Kickin' Country, and other popular shows featuring some of the Carolinas' best singers, dancers and instrumentalists.

The park is open from late March through early November, and includes a special Halloween event, SCarowinds. The Boomerang Bay season starts in May.

General admission includes the Boomerang Bay waterpark section of the park. One-day admission (online 2015 rates) is $39.99 for guests 48 inches and taller; walk-up price is $59.99 at the gate. Reduced rates for junior visitors under 48 inches tall or seniors over age 62 may be available. Children age 2 and under are admitted free.

Season passes allow guests to make the most of their theme park experience with unlimited visits per year for one low price.

New for 2015: Passholders can now add on a Carowinds All Season Dining Plan, which provides one lunch and one dinner each day at participating locations throughout the park.

Carowinds Camp Wilderness Resort has cabins and campsites and is next door to the park. Guests enjoy a free shuttle to the park plus a convenience store, laundry facilities, a swimming pool, miniature golf, shuffleboard and sand volleyball courts.

There are several options for lodging near the park. Although Carowinds lists a Charlotte, North Carolina address, the park is roughly 20 minutes from the center of the downtown area. Closer accommodations can be found in Ft. Mill, South Carolina, within about four minutes from the park. Options in Fort Mill include chain hotels such as Best Western, Econo Lodge and Quality Inn. Charlotte's official tourism site provides additional many lodging choices for the Charlotte area.

There are plenty of other great things to do near Carowinds.

For more information about Carowinds, including a park map, event calendar and other details, visit the park's official website or call 800-888-4386.