Epcot Center is a popular destination inside Walt Disney World, and it appeals to the imagination through both futuristic exhibits and an international showcase. It's home to two distinct areas which are Future World and the World Showcase. Technology and innovation are celebrated in Future World, while guests can enjoy international customs, rituals, and food in the World Showcase. So in one day, you can travel through space, as well as such far off countries as Germany, China and the UK.

Planning a Trip to Epcot Trip

Here are some basic facts about the Epcot Center that will help you begin planning a trip to the park. Keep in mind that hours of operation and ticket prices are subject to change, so be sure to also check the park's website for the latest information before you finalize your itinerary.

As you might expect, Future World is full of attractions that either depict what the world will be like in the future or what we need to do to develop the world into the environmentally -friendly space scientists say it needs to be in order to survive. You have probably heard of Spaceship Earth, but there are many other attractions that make this part of the park well worth a visit.

Quite possibly the most famous landmark of Epcot Center, Spaceship Earth is located at the front of the park, and it resembles a giant silver golf ball. You can't miss it as you enter the park's gates, and it is also home to a ride of the same name. Guests board vehicles in this attraction and journey through a simulated time machine viewing various aspects of technological evolution, beginning with cavemen and going on through the 21st century. Guests can see how computers have changed the face of the world and how we continue to advance today. 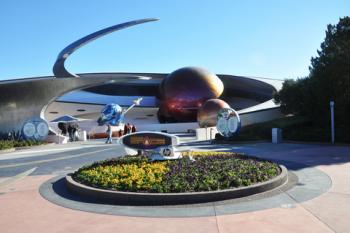 For aspiring space travelers, Mission: Space is the place to be. Guests become astronauts on a first time mission to Mars as they travel in a mock spacecraft on this motion-simulating thrill ride, complete with super strong g-forces. Riders are challenged to take control of their ship with various assigned tasks while working against gravity (or lack thereof), hyper sleep, and other aspects of futuristic space travel.

Come be a crash dummy on this General Motors-sponsored ride in the heart of Epcot. This is the one of the fastest rides found in any Disney park, and riders go through a simulated car testing system that includes heat and weather proofing, brake checks, and speed acceleration. This is the ultimate thrill for any Disney enthusiast, and many guests opt to ride it repeatedly, as is evident by the lengthy waiting lines.

Living with the Land

Cruise through the Land Pavilion where you will see the future of food production and multimedia displays of diverse ecosystems. There are still cutesy touches such as the Mickey Mouse pumpkin heads, but in general, this attraction is a serious reminder of how the world can and needs to changes

The Seas with Nemo and Friends

On this voyage, you will enter the Big Blue World in your Clammobile to look for the Disney character Nemo. Like all rides in the Epcot Center, this is no two minute thrill. After you have returned the famous clown fish to his friends, you will get the chance to watch the Finding Nemo characters mingling with real fish in the 5.7 million gallon saltwater aquarium.

At this 180-degree IMAX theater, you will grip the bars of a hang glider and soar over the state of California. Among other attractions, you will see the Golden State's redwood forests and orange groves.

The World Showcase is located in the back of Epcot, and 11 countries are represented.

Each pavilion features exhibits and cuisine from that nation, and some pavilions, such as Mexico and Norway, include classic-style Disney dark rides that celebrate their culture and traditions. Adding to the authenticity of the various nations, all park employees are from the country in which they work. For example, an employee working in the Japanese pavilion is a native of Japan. Disney has set up an internship program for young international citizens to work in Epcot for a set amount of time. This authentic cultural feel enhances the experience of guests who have never ventured outside of the United States.

Here's a sample of what you can expect to experience as you travel through the various pavilions.

The China pavilion displays all the famous traditions of this ancient and great culture. At the Nine Dragons restaurant you can eat such Chinese fare as Beijing duck and won ton soup. Every 20 minutes, a Chinese acrobatic group performs their stunts in front of dazzled crowds. Finally, who can forget the footage and replicas of such attractions as the Great Wall and the Forbidden City. 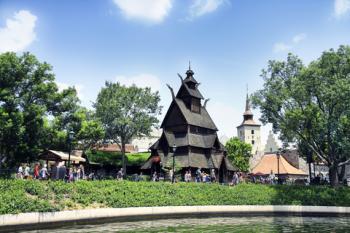 Skershus Royal Banquet Hall serves traditional hearty Norwegian dishes such as fish and potatoes. If that sounds boring, you should know the general consensus of the place on Trip Advisor was summed up by one reviewer when he stated "Pleasantly surprised." On this country's Maelstrom ride, you will encounter such famous Norwegian legends as trolls.

The German pavilion is designed to look like a German village, but each building's architecture is from a different era. In the Biergarten, you can dine on traditional German fare like sauerbraten, spatzle and sauerkraut. You can also shop for German wares, and if you're lucky, you just might run into Snow White.

France's pavilion looks like a Paris neighborhood where you can look up and see the Eiffel Tower in the distance. Juggling comedians and appearances by characters like Belle, the Beast, and the Hunchback of Notre Dame give this pavilion a bit of a carnival atmosphere. Don't miss the film, Impressions de France, which takes you on a virtual tour of this country's most famous landmarks. If you want to sample some fine French cuisine, be sure to dine at Chefs de France.

Enter the plaza and you're immediately transported to beautiful Italy, complete with a variety of this country's famous architecture. Shop for souvenirs and treats, and enjoy the street performers along the way. When you get hungry, head to Via Napoli, where your delicious pizza will be cooked in one of three wood-burning ovens which are each designed to look like one of the three gods that Italy's active volcanoes are named for.

Ale, fish and chips, and pub food are the order of the day in the UK section. Most famous is the Rose and Crown pub where you can eat pies with a pint of their best bitter. Guests looking for something served a little quicker can buy fish and chips (or sausage and chips) from the chip shop just around the corner. Entertainment is provided every 30 minutes by the bagpipes and guitar of the Off-Kilter Band.

The delicate beauty of a Japanese garden is set against classic Asian architecture, including a pagoda where you can listen to traditional Japanese tales, and experience the exciting rhythms of Taiko drummers. Among your dining options, the Katsura Grill offers delicious fare like curry, teriyaki, and sushi.

The exotic Morocco pavilion includes a bazaar where you can buy rugs, jewelry, and more. You can also visit the Gallery of Arts and History to learn about this country's rich cultural heritage. The buildings in this sector include a beautiful replica of a minaret and a typical Moroccan home. The Restaurant Marrakesh restaurant offers dishes like couscous with lamb shank and a variety of pastries for dessert. A belly dancer also perform here. 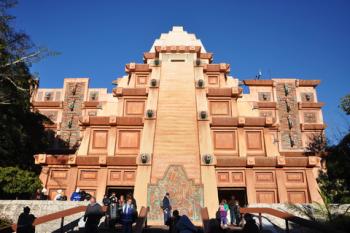 Pyramid at the Mexico Pavilion

Walk into the giant pyramid and become immersed in Mexican art and culture. Board the Gran Fiesta Tour boat ride and help two of the famous Caballeros search for their missing buddy Donald Duck. When you're finished, grab a bite to eat at La Cantina de San Angel.

If you are looking for a big meaty steak served with all the trimmings, head directly to the Canada pavilion. Their Le Cellier Steakhouse is fabulous, earning four out of five stars on Trip Advisor and comments such as "The best steak I've ever had."

This pavilion features a show on the history of the United States, cleverly presented by animatronic historical figures. The a cappella group, Voices of Liberty, also performs at various points around the pavilion. When you get hungry, visit the rotating Garden Grill and sample a variety of American dishes from their buffet.

Epcot was originally Walt Disney's idea, although the park itself did not open until the fall of 1982, quite some time after his death. Epcot stands for "Experimental Prototype Community of Tomorrow," which emulates Walt's passion for the future and all the advances in technology and innovation that it holds. The futuristic theme of this park appealed to many visitors in its opening year, and it continues to thrive today.

Walt Disney's original idea for Epcot Center was for it to be a community where 20,000 residents would live. After his death, the Disney Company decided to plan a park geared toward the technological future instead, which led to the creation of Future World. Some of Disney's engineers, or "imagineers" as they are affectionately known, wanted to focus on a different type of future altogether - the cultural melting pot our world has become. They envisioned a park where people could celebrate the varying ethnicities and traditions found throughout the world, and that dream became the World Showcase.

Whether you choose to visit Future World, the World Showcase, or all of Epcot Center in a single day, you will undoubtedly enjoy this integral part of Walt Disney World which continues to be cherished by millions of guests each year. Don't be surprised if you find yourself returning year after year.