Built as part of the LEGOLAND California Resort complex in Carlsbad, California (but requiring its own admission ticket), Sea Life Aquarium is an interactive attraction that allows visitors to explore a variety of sea habitats and learn about protecting ocean life. Owned by the same company that operates LEGOLAND (U.K.-based Merlin Entertainments Group), this attraction opened in 2008 to become the brand's first location in North America. 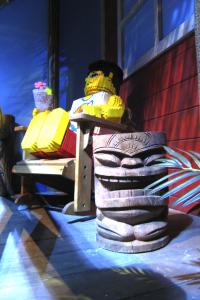 Sea Life Aquarium is intended to introduce visitors to a variety of marine animals and habitats in an exhilarating and hands-on way. LEGOs are incorporated throughout the exhibits, making a uniquely appealing learning environment for children ages 2 through 12. The two-story, 36,000 square-foot aquarium shows more than 30 displays of marine life.

The exhibits are all bright, attractive, and compelling, making a visit to Sea Life incredible fun. Of course, LEGOs play a big part, making up decorations in many of the environments and even inside the aquarium habitats. LEGO swimmers, divers, undersea exploration vehicles, and other elements are found in many of the tanks.

At the entrance, which is beautifully guarded by a giant LEGO fish, children can pick up a scratch card for the Sea Life Quiz Trail. This allows them to answer quiz questions throughout the exhibits, scratching off selections on their own card, to see if their answers are correct. The quiz questions are interesting and as fun as they are educational, often inviting children to look, touch and feel as well as think.

The newest exhibit, Jellyfish Discovery, opened in the spring of 2014 featuring more than 100 jellies lit up by spotlights in cylindrical display tanks. Visitors get a great view of these graceful creatures and can learn more through interactive elements, such as how they seem to dance in water.

In addition to Jellyfish Discovery, other exhibits include: 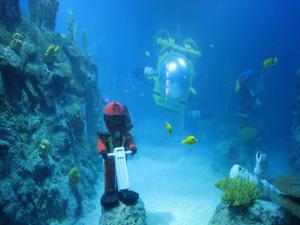 Animals in the Aquarium

More than 200 species can be found at Sea Life Aquarium, which translates to over 5,000 individual aquatic animals. Some highlights include the more than 50 sharks that call Sea Life home, such as zebra sharks, black tips, and white spotted bamboo sharks; watch them swim over you as you go through an underwater tunnel in the Lost City of Atlantis.

Visit rays in a hidden temple of the ray lagoon and admire seahorses in their own kingdom. Make sure to check out the giant Pacific octopus and the moon jellies in the Sea Life Lab. You can even feel some of the creatures, both in the touch pool and tide pool. Get hands-on with sea stars, sea hares and more touchable marine life.

Hand wash stations are conveniently located for use after your close encounters!

Sharing an entrance with the adjacent LEGOLAND theme park, Sea Life Aquarium is close to the 5 Freeway, just north of San Diego. 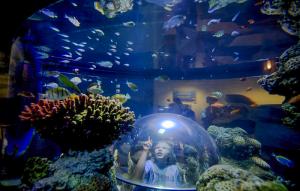 Sea Life is devoted to conservation efforts, increasing awareness of the importance of protecting marine life. To this end, Sea Life promotes "Breed, Rescue, Protect" activities worldwide. Its partner organization, the Sea Life Trust, is a registered charity established by Merlin to further champion the cause of global marine conservation and the environment.

The Sea Life Aquarium at LEGOLAND is a unique interactive aquarium offering rich experiences for visitors of all ages. Colorful, fun, and educational, the park is perfect for a visit for anyone interested in LEGOS, marine life, or both.

There are over 40 Sea Life Aquariums in the world (mostly in Europe), including London, Paris, Bangkok, Auckland and others. The California property is one of eight locations in the U.S.

0
Comments
© 2006-2020 LoveToKnow, Corp., except where otherwise noted. All Rights Reserved.
Resources, Advice & Tips for Covid-19
Read More
What to See at Sea Life Aquarium at the LEGOLAND California Resort