A visit to the SeaWorld Park in Orlando, Florida is not only a great theme park getaway, it's an eye-opening step into a world of exotic and intelligent animals, thrilling rides, spectacular shows, and high class dining. At SeaWorld, you can learn about killer whales, turtles, and thousands of colorful exotic fish. You can also interact with dolphins, stingrays and sea lions. If that's not enough, you can end the day 400-feet high as you look out onto the Orlando cityscape.

SeaWorld's Orlando, Florida park features 7,000 types of marine and terrestrial animals, as well as 60,000 types of fish, many of which are rare or endangered. In addition to its place as a family-friendly vacation destination, SeaWorld is also a rehabilitative and educational facility. Millions of guests learn about the delicate balance of ocean life by either studying the park's tanks and shows or going on one of their alternative experiences. Expert guides and staff members are on hand at all the park's attractions to answer questions, and the park practices numerous conservation efforts such as a "no straw" policy to protect the animals from inadvertent littering. Located in central Florida, the park is in a prime position to cater to millions of tourists, as well as local residents, nearby universities, and schools throughout the state.

From performing killer whales to graceful multicolored fish - the animals and sea life are SeaWorld's star attraction. You can either see their numerous skills at one of the shows or, for a more educational experience, view them at one of the Orlando park's lusciously-designed habitats, including: 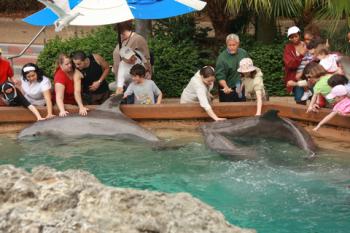 Other exhibits and tanks throughout the park are home to even more species, including eels, orcas, beluga whales, and penguins, as well as flamingos, corals, sea horses, jellyfish, and other reef residents.

Not only does SeaWorld deliver an outstanding experience with aquatic creatures, adventuresome guests can also challenge themselves to ride the park's amazing thrill rides. For younger children, there are more sedate rides at Shamu's Happy Harbor, as well as simulator rides and water rides suitable for all the family. 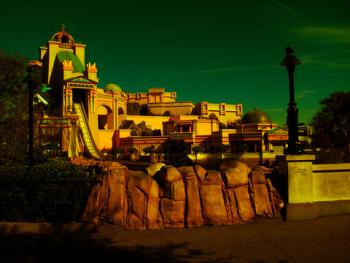 SeaWorld guests do not get the full experience of the park unless they enjoy its fabulous shows that blend animal talents with modern technology for world class entertainment. While schedules change and new shows are continually in development, popular shows include: 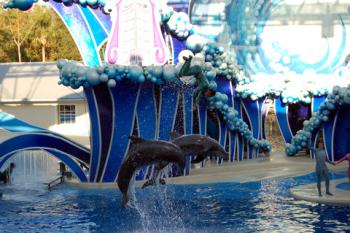 If you are going to the park close to a holiday, such as Halloween or Christmas, keep an eye out for seasonal shows such as Countdown to Halloween and a Sesame Street Christmas.

With so much to see and do, SeaWorld Orlando guests will work up quite an appetite during a day at the park. Dining options include a variety of seafood, chicken, barbeque, and wood-fired pizzas, as well as sandwiches, salads, ice cream, and other treats. Fine dining in the shark enclosure and Dine with Shamu specialty options are available for an additional charge. Both require reservations.

SeaWorld is open all year long, and a base price ticket runs around $79 for adults, and $71 for children ages three to nine. Discount tickets are available for members of the military, teachers, and other special groups, as well as Florida residents. Other special offers are available online or by combining a SeaWorld ticket with admission to Discovery Cove, SeaWorld Aquatica, or Busch Gardens Africa. 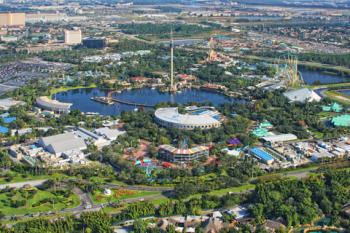 For more information about this amazing theme park, interested guests can visit the official website, or send an email.

Whether you are a kid or an adult, SeaWorld has something for everyone. With additional experiences such as swimming close up with the dolphins and behind scenes tours, they even cater to people with more than just a passing knowledge of sea life. So what are you waiting for? If you buy tickets online, you can catch all the great shows like those listed above; just remember they are all subject to change. You can also take advantage of all their current discounts such as Pay for a Day and Play All Year.

Comments
© 2006-2021 LoveToKnow, Corp., except where otherwise noted. All Rights Reserved.
About SeaWorld in Orlando, Florida