The National Safety Council notes that injuries due to amusement park rides are rare. Unfortunately, accidents do happen. Some are due to human error, others as a result of mechanical failure, and sometimes, it is a combination of both.

Six Flags has seen a rash of accidents over the decades despite increased attendance in 2017 and a record four percent revenue growth at the end of the second quarter. The world's largest regional theme park company entertains millions of guests each year, generating an annual revenue of approximately $1.3 billion.

The Six Flags Corporation owns and operates 17 parks in the United States (California, Georgia, Illinois, Maryland, Massachusetts, Missouri, New Jersey, New York and Texas), two parks in Mexico, and one park in Canada, with additional parks under construction in China and Dubai. In view of the fact that Six Flags maintains hundreds of rides and other attractions around the world, there's always a chance that an accident could occur at one or more of their parks. The best safety precautions and emergency procedures are not always foolproof.

A number of fatalities and mechanical incidents at Six Flags parks over the years highlight the fact that not all rides are one hundred percent safe, accidents do happen, and they can result in death.

February 5, 1978: At Six Flags Magic Mountain in Valencia, California, a couple boarded a gondola on a ride called Eagle's Flight. They rocked the gondola so hard and fast that the gondola swung so dramatically that the husband of this newlywed couple died as the ride descended.

August 16, 1981: A park employee died after he was thrown from the Rolling Thunder roller coaster at Six Flags Great Adventure in Jackson Township, New Jersey. Investigators came to the conclusion that the 20-year-old employee might not have been using the safety bar on his test ride. The report issued by park officials stated the employee was not riding in an authorized position.

March 21, 1999: A woman was pinned under a boat on the Roaring Rapids water ride after the boat capsized in three feet of water at Six Flags Over Texas in Arlington, Texas. The woman drowned and her family was paid $4 million. The remaining ten passengers suffered minor injuries.

May 3, 2003: An 11-year-old girl died after riding the Raging Bull roller coaster at Six Flags Great America in Gurnee, Illinois. A coroner concluded her death was most likely caused by choking on a piece of gum or taffy during the ride.

July 10, 2003: A 53-year-old woman was struck and killed by the Joker's Jukebox at Six Flags Over New Orleans. Witnesses reported that she had been checking the seatbelt of a young child, presumably her grandson, when the accident occurred. 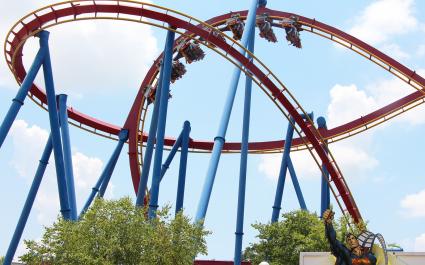 May 1, 2004: A 55-year-old man was killed when he fell from the Superman roller coaster at Six Flags New England in Agawam, Massachusetts. Investigators determined that due to the man's large girth, he was not properly secured by the ride's restraint system. The coaster was subsequently outfitted with redesigned safety restraints. Similar coasters at other parks also incorporated the new safety restraints.

July 22, 2013: A woman died riding a roller coaster at Six Flags Over Texas in Arlington, Texas. The Texas Giant Roller Coaster is billed as the tallest steel-hybrid roller coaster in the world. The woman was ejected from this ride and flew 75 feet when the ride dropped down. It was claimed that the woman was not properly secured to her seat and that her family tried to get her off the ride before it started. Witnesses saw that as the coaster turned, she was not on it. When the safety bar released, she tumbled out to her death. Employees told press that there had been mechanical and sensor safety issues. Six Flags Over Texas reported no mechanical failure.

June 17, 2015: A 10-year-old girl was airlifted to hospital after she was found unconscious after riding the Revolution roller coaster at Six Flags Magic Mountain in Valencia, California. The girl was pronounced dead at the hospital of natural causes. Autopsy results indicated her death was not due to the roller coaster ride, which was temporarily closed.

Some accidents at Six Flags are due to mechanical failure, as well as human failure to follow the rules of the ride, resulting in a series of tragic incidents of a peculiar nature.

June 21, 2007: At Six Flags Kentucky Kingdom in Louisville, Kentucky, a 16-year-old girl's feet were severed above the ankle while riding Superman: Tower of Power. Witnesses say a steel cable snapped and wrapped around her feet. Similar rides at all Six Flags and Cedar Fair parks were closed for inspection. 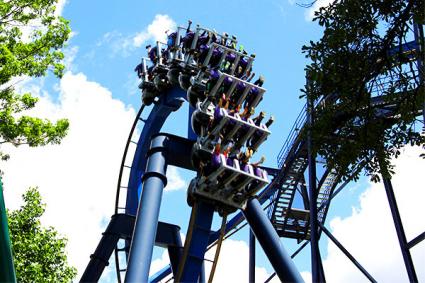 June 28. 2008: A teenage boy was decapitated at Six Flags Over Georgia located in Austell, Georgia when he jumped over the railing of the Batman roller coaster to retrieve his hat. The ride was operating at full speed (50 mph) when it struck him. No one on the ride was injured.

September 30, 2012: A 19-year-old man somehow survived when he fell 75 feet from the Venom Drop water slide at Six Flags Hurricane Harbor in Los Angeles, California. He was immediately rushed to the hospital where it was determined he suffered no injuries. Park authorities insisted the guard had not authorized him to go down, and that the man went down head first against park rules. The rules stipulate that riders must go down feet first with their arms crossed over their chest in order to experience this 90 degree vertical plunge safely.

Stranded on a Ride

People love thrill rides until something goes wrong. Frightening incidents from being stranded on a ride for hours due to mechanical failures continue to happen at Six Flags amusement parks. Some of these accidents were caused by riders not following park regulations.

July 8, 2014: A roller coaster called the Ninja at Six Flags Magic Mountain derailed, leaving 22 patrons dangling at a 45 degree angle and going into trees. The riders were stranded for three hours. Four riders were hurt and two riders were taken to the hospital.

May 20, 2017: The Joker, a new roller coaster at Six Flags Over Texas in Arlington, Texas, malfunctioned and stranded eight students until 3 a.m. Bad weather rolled through the area, making their wait time even more uncomfortable and stressful. It took three hours to rescue the uninjured students. The park closed this ride and is investigating the cause of the malfunction.

June 26, 2017: At The Great Escape and Splashwater Kingdom in Queensbury, New York, a 14-year-old girl was stranded on a gondola ride called the Sky Ride. The girl let go and fell from the ride, striking a tree limb. She was caught by people in the crowd. Park officials reported that the car was in working order. She was treated and in stable condition with no serious injuries.

Be Aware of the Rules

While it may seem as though there have been a lot of severe accidents and some deaths at Six Flags' numerous parks, it is clear from the investigations that the parks were only responsible for some of these incidents. Other accidents were caused by the victims' own actions. If park guests follow each park's rules, learn a few roller coaster safety tips, as well as take other common sense precautions, many accidents can be avoided. A rule of thumb is to be aware of the rules and make sure that you abide by them and try not to panic if an incident does occur.