The Wizarding World of Harry Potter at Universal Orlando Resort brings the written words of J.K Rowling to full life. Since the opening of Hogsmeade in the Spring of 2010 and Diagon Alley in 2014, these magical lands have captured the imagination of guests by transporting them into the land with which so many have become familiar through both the books and films.

The key element for all involved was in keeping the experience authentic and true to the movie. This thought process extends not only to the facades and interiors, but is equally visible in everything from the menu offerings at the various food outlets and products available for purchase in the different stores to the costuming of and conversations with the many cast members who are integral to creating the magic.

Hogsmeade at Islands of Adventure

At Islands of Adventure, Hogsmeade is home to Hogwarts, which towers over the town. Enter the castle to find the School of Witchcraft and Wizarding in full swing from the Professor Sprout's herbology-Mandrake-growing-greenhouses to the portrait covered Grand Staircase where conversations ensue among the pictures while visitors listen in. Step to Dumbledore's Office as you explore the corridors and classrooms each with secrets and surprises before taking off on a wild ride to adventure with Harry and his friends. 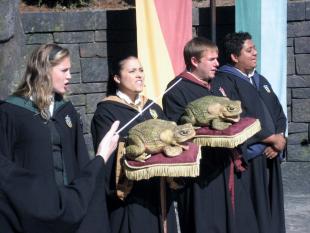 In the town below, the butterbeer and pumpkin juice flows. The detail is extraordinary, so peeking into every window, reading all the signage, and looking around corners is highly recommended. Be on the lookout for the performances of the Frog Choir, which is not to be missed. 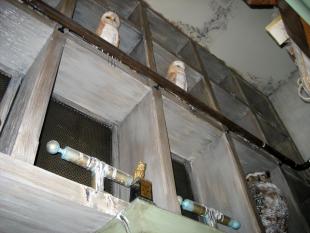 Take a photo beside Hogwarts Express and ask the conductor all those unanswered questions about the train and Hogsmeade you have always wondered. Duck into Owlery. Be sure to look up before you take a seat as you may want to be careful. There are many occupants in the rafters.

If you get peckish while in Hogsmeade, step into the Three Broomsticks for delicious Fish and Chips or delectable Shepherd's Pie. Step over to the Hog's Head pub for some libation and be entertained by the snarling hog head above the bar. Even in Wizarding World, there are healthy options including Kids Meals that offer the choice of fresh fruit or trans-fat free fries. 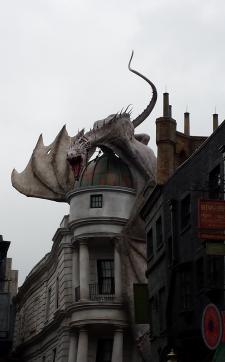 At Universal Studios, Diagon Alley features Harry Potter and the Escape from Gringotts, an amazing ride that goes beyond a roller coaster through the use of 3D technology, impressive sets, and brilliant effects. Standing in line is almost as fun as the ride! Be sure to look at the newspapers with moving pictures, check out the names of some of the books, and watch the goblins hard at work at the exchange.

The experience in the shops here is not to be missed!

Borgin and Burkes: At Borgin and Burkes in Knockturn Alley, step in to find all kinds of scary objects for dark magic as you work your way through to the back where the Vanishing Cabinet resides. Listen closely and you may hear the chirping of a bird coming from inside. If you have a wand map, be sure to take a look at it under the blacklight outside to reveal mysterious figures in invisible ink. 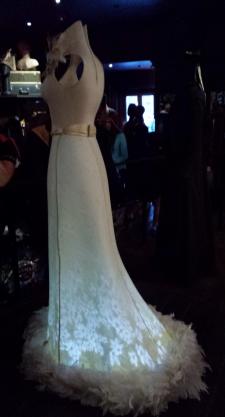 Quality Quidditch Supplies: Next to Weasley's Wizard Wheezes, Quidditch players can be well-supplied, as can any house member at Quality Quidditch Supplies. Check out the antique Quidditch uniform on display. If you need wizarding supplies, then head over to Wiseacre's Wizarding Equipment. Even if you don't need anything from there, it is worth going in just to look up at the ceiling for an astronomical view.

You'll find plenty of tasty treats in Daigon Alley. While the Leaky Cauldron features the same fine fare as Three Broomsticks, Florean Fortescue's Ice-Cream Parlour is well worth the wait. Highly recommended is the Chili Chocolate and Earl Grey Lavender ice cream, each magical in its own right. 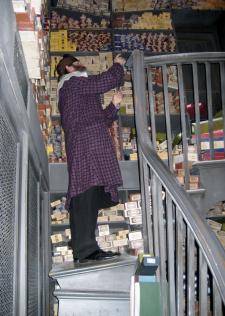 No trip to The Wizarding World of Harry Potter would be complete without a visit to Ollivanders Wand Shop, and there are locations in both lands! There are character wands for the likes of Bellatrix, Hermoine, Ron, Luna, yes, even Valdemort, among others, available. You can also find wands made from unique woods, like birch, rowan, hazel, and holly, to align with the individual personality and character traits of the witch or wizard.

Each of the wands, character or wood, are available in two styles - traditional and interactive. The interactive wands allow the bearer to use the magic of their wand to conduct special magic at identified locations within the two lands. A map is provided that indicates both where the medallion for the magic can be found and the specific movement that must be conducted with the wand to make the magic happen. Point the wand at the toilet in the window of Weasley's Wizard Wheezes or illuminate the window of Flimflam's Lanterns.

Hogwarts Express makes the experience between the two parks wholly unique. Departing from Platform 9 3/4™ at King's Cross Station in London on the Universal Studios Florida side and arriving at Hogsmeade Station at the Islands of Adventure (or vice versa), guests with two-park admission or annual passes can travel between the lands and have an adventure on the way.

This unique travel brings guests a seamless excursion from the daily life of muggles to that of wizards and is a not-to-be missed part of the adventure. The story is different in each direction, too, so be sure to plan to travel both ways.

A Trip to Remember

For both the Harry Potter super-fan and the novice wizard or witch, plan a visit to these two amazing lands to be immersed into different times and places. There is so much to explore, discover, and do, and the shopkeepers and characters that frequent both sides are eager to further personalize your experience. A trip to the Wizarding World of Harry Potter is like stepping right into the books and becoming a part of the amazing story and finding your own secrets into that magical place. Oh, and don't forget to look for the fire-breathing dragon!

Comments
© 2006-2021 LoveToKnow, Corp., except where otherwise noted. All Rights Reserved.
What to Do at The Wizarding World of Harry Potter in Orlando