The thrill of a Top Gun roller coaster mimics the awesome aerobatics of fighter jet maneuvers, and thrill seekers have four different options for experiencing these exciting drops, curves, and spins on themed roller coasters.

About Top Gun: The Movie and the Coasters

Paramount Pictures' Top Gun, starring Tom Cruise, was the top grossing movie of 1986. The military-themed drama told the story of a group of elite navy fighter pilots competing in a fighter school setting to become the "top gun" of the cadre, but they found that their personal lives and emotions went through more dangerous maneuvers than their F-14 Tomcat jets. As the popularity of the movie continued to grow even years after its release, the Paramount theme parks began to capitalize on that appeal by theming several new roller coasters with a Top Gun premise.The themes of the several Top Gun coasters varies, but each one maintains a connection to the namesake fighter jets either through the stark steel gray coloration, patriotic accents, or incorporation of movie clips, music, and other props into the surrounding area. The rides themselves are fast and sleek, offering a taste of the wild maneuvers of a fighter jet.

Where to Find a Top Gun Roller Coaster

In 2006, the Paramount company sold its theme parks to Cedar Fair, the same company that owns Cedar Point and several other theme parks around the country. The justification for the sale was that operating theme parks was too far removed from the company's mission of movie production and distribution, but because of the familiarity and popularity of the Top Gun name, the four Top Gun coasters kept their monikers and related theming. Roller coaster fanatics interested in experiencing the rush of a Top Gun ride can do so at the following four parks: 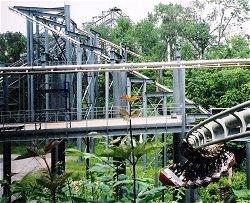 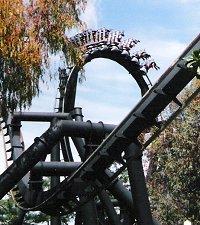 Because these four roller coasters mimic the intense motions of fighter jets - including barrel rolls, loops, dives, and sharp curves - they are not recommended for all riders. Height requirements vary from 48 to 54 inches minimum depending on the specific coaster, and the rides are not recommended for guests with heart, back, or neck problems or guests who may be pregnant. All the coasters utilize an over-the-shoulder style safety restraint that may be uncomfortable for exceptionally large or tall guests. Loose articles should be properly secured or left off the ride to prevent loss or damage. Because these coasters are consistently popular, lines are longest in the middle of the day and early morning or late evening wait times are typically shorter.

Other Coasters to Try

Not every Top Gun movie fan will have the opportunity to ride a Top Gun roller coaster. If the nearest theme park does not have one of these movie-oriented rides, there are other ways guests can replicate the thrill of a fighter jet ride.

All entertainment venues thrive on the popularity of blockbuster movies, including theme parks. A Top Gun roller coaster may not have the special effects and rolling cameras of the original 1986 movie, but it can be just as thrilling as starring in any action picture..