White Water Landing at Cedar Point was one of the park's most popular water rides during its 23 years in the park's Frontier Town area, and it delivered millions of rides to eager park guests interested in a fun way to cool off.

Built in 1982, White Water Landing was the longest flume ride in the world when it opened, and the ride experience is one that riders of ages enjoyed for decades.

Most amusement park rides last less than three minutes, but White Water Landing lasted nearly five minutes from the time riders boarded their fiberglass canoes until they arrived back in the station after a 45 foot drop at an astonishing 40 degree angle. The 2,370 foot long ride wound through five acres of isolated forests and lagoons at speeds up to 35 miles per hour. One of the ride's most unique features was the 225 foot hydro-jump at the bottom of its dual chute drop that literally skipped boats along the runout area in a series of thrilling splashes before a quiet twist into the station.

From the time it opened in May 1982 until it closed in October 2005, White Water Landing hosted an outstanding 28,000,000 riders, and its legacy lives on in the memories of its fans.

As part of the Frontier Town area of the park, White Water Landing embraced an Appalachian river ride theme. The revolving station released boats alongside a rustic warehouse before they turned along the edge of a lagoon and approached the ride's first lift - a conveyer that gently elevated the canoes through a mine shaft and splashed them into a faster section of river. A few quick turns along the rapids and the canoes approached the larger second lift, which raised riders to the treetops at a height of 50 feet. In the peaceful calm far above the park's midway, canoes snaked along the serpentine trough, gradually slowing as they approached the treacherous drop.

Canoes alternated which of the identical chutes to drop down, then skimmed the hydro-jump before peacefully floating alongside the lagoon as they returned to the station. 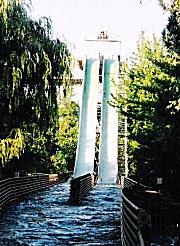 The White Water Landing that was removed from Cedar Point at the end of the 2005 season was not the exact same ride as the one that had opened 23 years before. As any amusement park ride ages, different parts are reevaluated and altered, and this lengthy flume ride was no exception.

One of the biggest changes to White Water Landing at Cedar Point was just after the first lift. Initially, the first drop plunged riders into the abandoned shaft of a gold mine, complete with glowing veins of precious metal lining the walls. At the end of the mine shaft, a small waterfall was positioned to ensure all riders got a little splash - a foreshadowing of the bigger drop they would soon endure. Over the years, however, first the waterfall ceased to function and finally, the mine shaft itself was removed as its structure became unstable and prone to excessive damage from the elements and the splashing from the ride. The building covering the lift remained, however, adding a quaint touch to the ride's theme.

Another drastic change to White Water Landing happened after a ride malfunction in 2002 that led to a serious accident at the end of the large drop. Because the boats were free in the trough, they sometimes crowded one another through the safety gates, and if a boat got stuck before passing the appropriate sensors, the results could be dangerous. While there were no severe injuries from the 2002 incident, it was decided then that only one side of the twin chute would be operated, which effectively slashed the ride's capacity. It was that factor, as well as the general age and maintenance costs of the ride, that led to its removal after the 2005 season.

While Cedar Point's more than 300 acres make it one of the largest parks in the world, the five acres that White Water Landing occupied were undoubtedly prime real estate for a new attraction. When the ride was removed, construction began on the park's seventeenth roller coaster, Maverick. Because Cedar Point has always been known for its wide selection of coasters, that is a fitting replacement for the flume ride. While Maverick's height restrictions and elevated thrill factor will appeal to fewer guests than the family-friendly fun of White Water Landing, it is sure to live up to the legacy of decades of thrills its predecessor delivered.

For an initial investment of $3.4 million, White Water Landing at Cedar Point thrilled many more millions of riders during its long life at the amusement park. While there is no longer the clunk of canoes floating down the fiberglass trough, the laughter and fun of the ride will live long after its last drop of water was spilled.